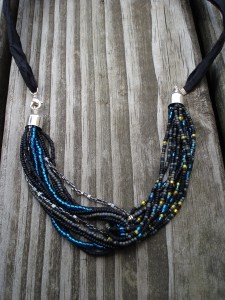 I completed this piece as a bracelet using the Bead Spinner and a whole lot of seed beads.  It wasn’t until I had tied and trimmed the many strands that I realized it was too long to be a bracelet.  Normally I have no problem ripping a piece apart to get the size right.  We’ve all been there.  But doing so in this case would waste a whole lot of stringing material and time.

So what’s the alternative to redoing a project?  Rethink what the project is.

In this case, my unfortunately long bracelet turned into a convertible wrap bracelet/necklace with just a few bits and bobs that most beaders will already have in their stash: a length of sari silk, a fold-over ribbon end, two jump rings, and a lobster claw. 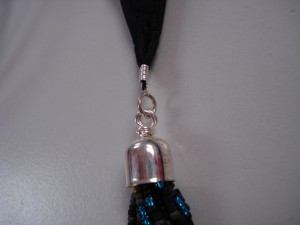 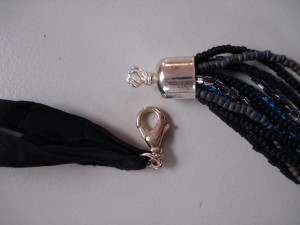 I folded the sari silk (about 24″) in half, threaded a jump ring onto it, then put both ends into a single ribbon end, making a loop much like a short lanyard.  Onto the jump ring went the lobster claw (swivel, in this case, for ease of use), which will latch to one side of the former bracelet.  The ribbon end gets connected with another jump ring to the other side of said bracelet, and voila: a finished piece that can be worn as a necklace or a wrap bracelet. 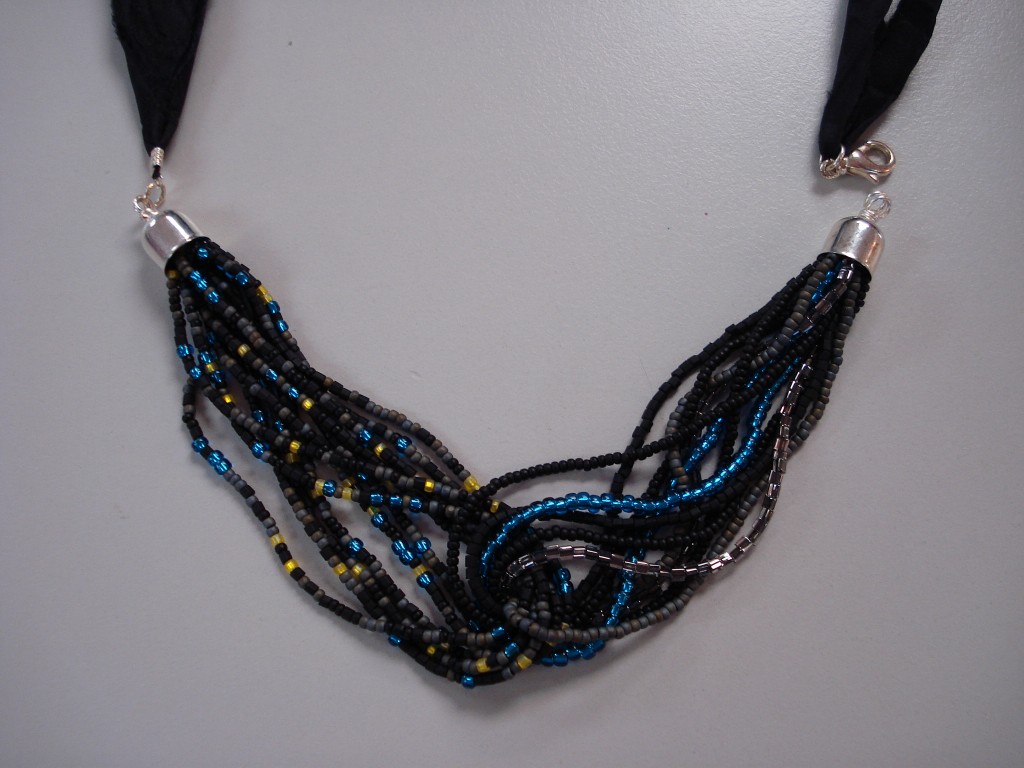 Am I disappointed that my original idea didn’t work out?  Yes.  Am I happy with the final product?  Not entirely.  But when I tried it on Michelle to test the fit, she liked it!  And I got to make this blog post about an oops that had really disappointed me.  So there’s that.

And hey, it’s a piece of jewelry that can actually be worn now!

In 1940, only a year after the premier of Batman in Action Comics, Dick Grayson – Robin – was introduced to the series.  Son of aerialists John and Mary Grayson, Dick was orphaned after an extortion scheme on Haly’s Circus by Gotham mobster Tony Zucco resulted in his parents’ fatal fall from the trapeze.  Bruce Wayne, in the audience that night, witnessed their murder.  Not wanting Dick to experience grief as consuming as his own after the death of the Waynes, he took the boy as a ward.

The story of how Dick Grayson became Robin has been retold by many authors in the seventy years since his creation.  What remains constant is a young protégé swearing an oath to his mentor to do all in his power to serve justice.  For Batman fans, this image has remained as a keystone for events to follow.

In his career as a vigilante, Dick Grayson lead Young Justice and the Teen Titans as Robin.  After shedding the cape and tabard to become Nightwing, he would form the Outsiders, lead the Justice League, and have multiple stints under the cowl as Batman.

This color palette is inspired by the Batman & Robin arc by Grant Morrison following the events of Bruce Wayne’s death and Dick’s taking of the Batman mantle, featuring the classic black, grey, and yellow with a bit of Nightwing’s iconic electric blue.